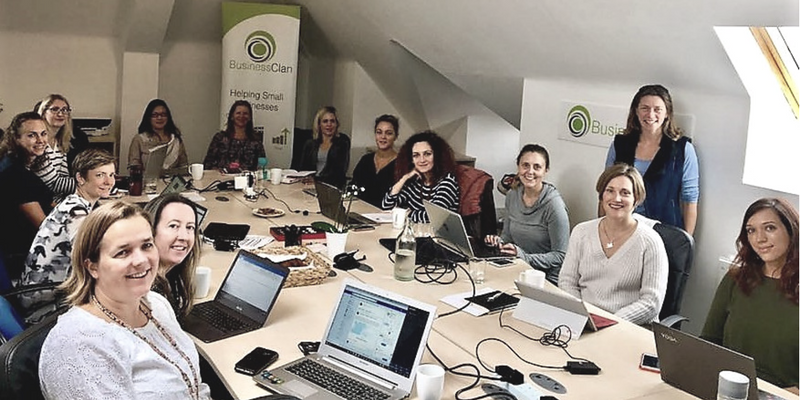 Yes. We are ALL women.

If we had a pound for every man* that has said, “And you’re all women?!” in an incredulous tone to Delia and I over the last four years, then we would be able to afford the Nespresso coffee machine for the office that the team are yearning for – and probably a lifetime’s supply of capsules too!

Yes, we are ALL women.

Why we work flexibly

Business Clan is a flexible working company currently staffed entirely by working mothers. We work in the office during the school day: part-time and term-time. We also work from home some days, and sometimes in the evenings and at weekends too. We work in this way so that we can still drop our kids off at and pick them up from school; leave work at a moment’s notice when the school calls to tell us they are ill or text us to say they are closing early because of the snow (last week!). We work like this, so we are there for our children’s sports days, assemblies, school trips and holidays, as well as the day-to-day parenting tasks.

Parenting and the gender pay gap

We would happily improve our gender balance, but the sad fact is that most men don’t need to work flexibly. They didn’t take a break to have their children: their careers continued to progress and their salaries continued to rise when they became parents. In January 2018 the ONS published analysis into the factors which affect the UK gender pay gap. Sheila Wild summarises it on her website the Equal Pay Portal:

“When looking at age groups, the gap for full-time workers remains small at younger ages. However, from 40 onwards the gender pay gap widens, reaching its peak between ages 50 to 59 for full-time workers. While both men’s and women’s pay grow for most of their lives, overall, women’s pay grows less than men’s and also stops growing earlier than men’s pay.”

She also notes that the ONS goes on to point out that:

“63.9 per cent of the gender pay gap cannot be explained, and suggests that the analysis would benefit from information on family structures, education and career breaks; without these the unexplained element is over-stated. Factors such as the number of children, the age of children, whether parents have any caring responsibilities, the number of years spent in school and the highest level of qualification achieved are likely to improve the estimation of men’s and women’s pay structures and consequently decrease the unexplained element of the pay gap.”

We know from the experience of every member of our team and many female friends and acquaintances that their careers prior to having children just weren’t available to them afterwards. If factors such as the number of children, the age of children and whether parents have any caring responsibilities were added into the research, we are certain that this would explain much of the pay gap.

Many fathers would like to spend more time with their families. Gender inequality means most fathers miss out on the sports days and assemblies (I’m sure they didn’t mind missing the snow-dash though!) and most mothers carry the responsibility of caregiver alone, for the majority of the time.

Haven’t we heard enough from women?

You might think we have heard enough from women this year with #MeToo and the Time’s Up campaign. In fact, someone recently remarked to me, “Isn’t 2018 the year of the woman?”. Some seem to labour under the illusion that Equalia, as Catherine Mayer, one of the founders of the Women’s Equality Party terms it, has been reached. Perhaps they need to think a little more about the very structure of our society. Start with Barbara Kingsolver’s “#MeToo isn’t enough” article from The Guardian in January. Or ponder this quote from Catherine Mayer’s book “Attack of the 50ft Women”: How Gender Equality Can Save The World!”

“Among CEOs of the biggest companies in the UK and the US there are more men called John than women of any name.”

Why do people ask the question?

Is it because we are a professional services company that people are so surprised we are all female? If we were in an industry seen as traditionally female, would the question arise? What we come back to, after we’ve rolled our eyes and sighed for the millionth time, is that no one would ever say this the other way around. Can you imagine? “Wait, what?! A company that’s all male. No way! How did that come about?!”

What we are still working towards

So, yes we are all women. But our vision for the future, as I wrote in my International Women’s Day blog last year, is for our society to move to a flexible working model for all, where couples share the parenting and domestic responsibilities whilst still maintaining their careers and a work/life balance which leads to a more contented life. It will happen a lot faster if everyone campaigns for change and strives to lead by example. And that’s exactly what we are doing here at Business Clan.

We are currently recruiting. Men are welcome to apply!

*Brownie points to the team at Skore for being the only blokes to come to our Raynes Park office and not comment on our lack of gender balance.

Previous Post
How to get ready for GDPR – follow our 6 step action plan
Next Post
How can leaders develop resilience in their followers or teams?
Menu