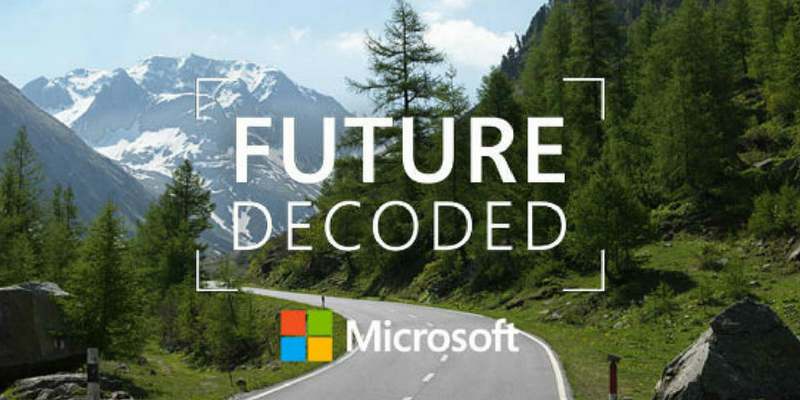 The line-up of keynote speakers was as impressive as last year and followed Microsoft’s “Make IT Happen” campaign focusing on productivity through engagement and digital transformation.

But who impressed me most?

In no particular order:

Richard Reed, founder of Innocent Drinks, also deserves mention for his presentation titled, “7 Things We Found To Be True” with lots of good advice and morale boosting one liners for start-up entrepreneurs and business leaders alike to feel inspired by. But first, Mike Stone …

Mike Stone, CIO of the Ministry of Defence (MoD)

Mike Stone was appointed eighteen months ago as CIO of the Ministry of Defence (MoD). In his keynote he told us that he had the remit to “transform at pace” and deliver his vision of DaaP (Defence as a Platform). He’s certainly well on the way. His genius decision to buy the IPR (intellectual property rights) from their multiple vendors to enable their systems to talk to each other meant they could break up silos of activity and become agile. In conjunction with adopting a Kaizen approach (improving quality and efficiency by constantly adopting small incremental changes) his team has reduced contract implementation from years to months. A fantastic start to making IT happen! But what lesson to learn if you run a small business? Well …

As Mike Stone said “Innovation is about the little things and also about asking the right questions”. And, I would add, don’t forget to encourage others to do the same. If you think something can be improved, then it probably can. Just keep asking questions and you’ll find a way.

I hope British Rail and city planners heed Mike Stone’s advice. My journey to ExCel was arduous – not a great way to start the day. Along with many other commuters from south west London, we endured delays, over-crowded train carriages and queues to get on the Jubilee Line. A co-commuter expressed despair that our city’s transport network will never catch up with demand as more high-rise offices and flats bring more people into our city. Perhaps this should be Mike Stone’s next challenge!

Satya showed his human side and gained admiration from some of the techies in the audience, me included, by calmly demonstrating Microsoft’s latest productivity tools for mobiles. There were also a few chuckles as he announced “It’s not my phone, it’s an iPhone”.

As anyone who’s ever done a live demo will tell you, you never quite know whether the technology will work. Luckily all went well for Satya.

Later in the day, Satya was interviewed by Emma Jones, Founder of Enterprise Nation. With an audience of entrepreneurs he shared how he still learns from and is inspired by small businesses. After all, every big business was once small. I was then cheerfully surprised to hear the CEO of Microsoft nonchalantly comment “not all start-ups need to be scale-ups”. What a breath of fresh air! But, I wonder what he really meant? Unfortunately I didn’t get the opportunity to ask. Perhaps he shares my view that there’s too much emphasis on scaling up when what we really need to do as a society is adopt Martha Lane Fox’s vision for doteveryone and instead focus on delivering prosperity and social well-being to everyone?

So, what lesson to learn from Satya Nadella? Well. Exactly that …

For me, continuous learning is key to entrepreneurial success and, more importantly, it is key to personal as well as professional success. Learning is a fundamental skill which I believe we all need to utilise (young or old). Learning helps us do things and achieve things which, on Maslow’s hierarchy of needs, leads to self-actualisation (ie realising personal potential and self-fulfilment). But what happens when you don’t have a goal (or too many goals)? There’s no motivation.

Having a goal holds true for individuals, small businesses and large corporations. Richard Reed, Founder of Innocent Drinks, echoed this need for single-minded focus. His first point was “Keep the main thing the main thing” ie be clear about what you stand for and what you’re there to do.

Richard then stressed the importance of everyone thinking entrepreneurially and talked about it being a “mindset”. He advocated Google’s approach to recruiting only A-types as a way of driving your company forward. Whilst I agree you need like-minded team players all focused on the same goals, it’s also necessary to have diversity and balance. Yes, you need leaders who are ambitious and altruistic but I question whether all businesses need a whole workforce of A-types. I am sure some businesses would not survive by recruiting only A-types.

With all the talk of A-types, it made me look round the auditorium. I counted more men with bald heads (no offence guys) than women. Encouraging women into STEM (science, technology, engineering and mathematics) sectors is one issue but the bigger issue is how to retain their talent (whatever sector they work in). I don’t have all the answers but I certainly have some ideas:

Female entrepreneurship has increased significantly but at what cost to retaining talent in corporate board rooms? Instead of focusing on trying to turn everyone into an entrepreneur, let’s instead focus on diversity and inclusion and, in particular, social well-being: teaching everyone how to live and enjoy living in a digital world to the benefit of all. This is the doteveryone vision of Marth Lane Fox.

Takeaway # 3 – address prosperity and social well-being for all citizens

The doteveryone vision is of a joined-up infrastructure enabling the UK to leapfrog into the future to the advantage of all citizens. It’s a big vision and one I’d like to be part of. In fact, I am part of it. At Business Clan we are enabling women to skill up after career breaks and re-enter the job market. We’re bringing their talent back into the economy, creating a positive impact on their social well-being whilst at the same time helping small businesses to prosper.

Previous Post
The Data Protection Act: what you need to know
Next Post
Q&A on the ECJ ruling on travel to work
Menu